A few days ago, you decided to attend an event in Nashville, while Tennessee was still under a stay at home order for COVID-19, to express your objection to that order – and also to carry the most ugly and uncalled for sign imaginable. 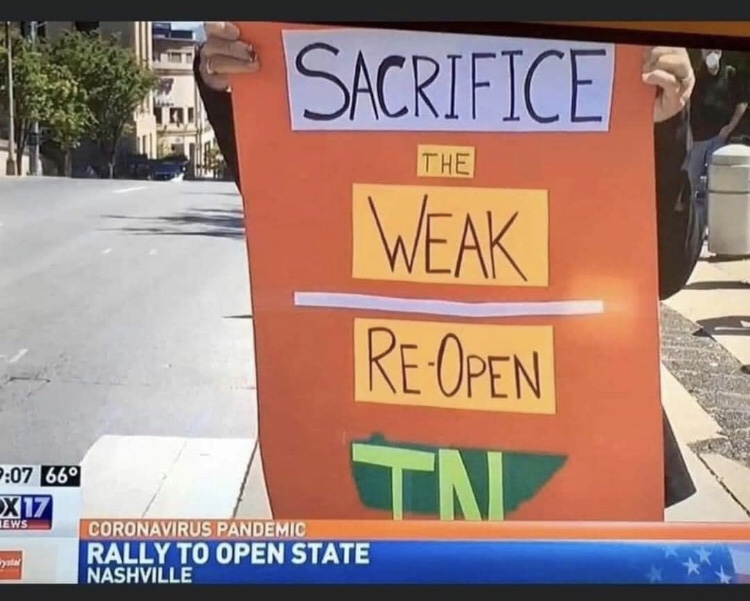 In fact, it was so ugly that I saw the image of it in my home in central Alabama – and it seems to be making the rounds on social media now. And I guess it had the desired effect because I was completely floored. Taken aback. Wrecked.

But, before I go further, let me briefly introduce myself to you, so you know why your sign had such an impact. . .

Back in 2012, I was healthy and strong and had just married the man of my dreams. We had moved into a new house and were getting all cozy. I was working as a nurse, as I had for many years and all was well. . .

Then, one weekend, about a month after our wedding, I was suddenly terribly ill and unable to get out of bed. . .

After a trip to the emergency room and being found to be profoundly anemic, I was diagnosed with celiac disease, causing a GI bleed. From there, as often happens, over the next few years, I became more and more ill and was diagnosed with rheumatoid arthritis and fibromyalgia and I developed complex regional pain syndrome, as well as several other assorted diagnosis I won’t get into right now.

I’ve had many complications as a result and some surgeries and I’ve been septic and now have some new spinal issues. It’s just been a rough road – from healthy seven years ago.

I am undoubtedly one of your “weak.”

There are MANY of us.

And, while your sign is certainly the most blunt and aggressive messaging I’ve seen since this all began, you aren’t the first to suggest that COVID-19 deaths don’t matter if they are “just” the elderly and the chronically ill.

Not by a long shot.

We’ve been hearing this. 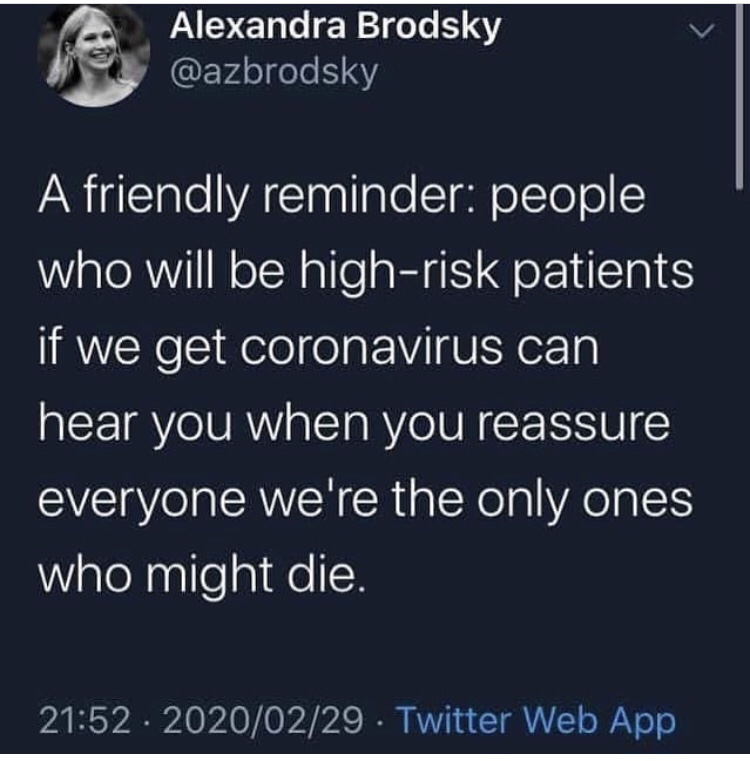 Fortunately, I suppose, at least most people are just being thoughtless, not intentionally cruel. I can’t say the same for you.

First, just like you, I have a family that loves me, that goes to a great deal of effort to keep me home and sheltered from this illness, that would be devastated if something happened to me. I, and the other millions of people living with chronic illnesses, are REAL people with REAL lives and REAL families and friends who love us. We are not disposable.

Second, I have no idea how you spend your days, but, despite my illness, I am still writing here on my blog, working on my first book, planning trips, dreaming dreams, looking forward to shows and plays. . . I still have work to contribute and life to live. I am not useless or done living because I am sick.

Also, even if I could do nothing, we are all image bearers of God and NO ONE is worthless. We all have value in His eyes – not because of what we can do but because we are His.

Additionally, when you are ready to discard the weak, is that true if the weak include your own grandmother or your best friend with Lupus? Or is it just strangers? just wondering. Maybe you should give some more thought to just who the weak are.

And, finally, next time, before you make your signs, you might want to consider this: just because you are healthy now doesn’t mean you always will be.

For example, here in the United States, a much larger percentage of serious COVID-19 cases are being seen in younger people without pre-existing conditions than were seen overseas. So you might not be exempt.

Or you might want to remember that I literally laid down for a nap one night fine and woke up with CRPS – one of the three most painful conditions in the world – with no rhyme or reason as to why.

Again, just because you are healthy now doesn’t mean you always will be.

Fortunately, if you were to fall ill, most people would wish you well.

Most people aren’t as cruel as you are.

Most people have a heart.

It’s time to take a long hard look in the mirror.

This is not okay. 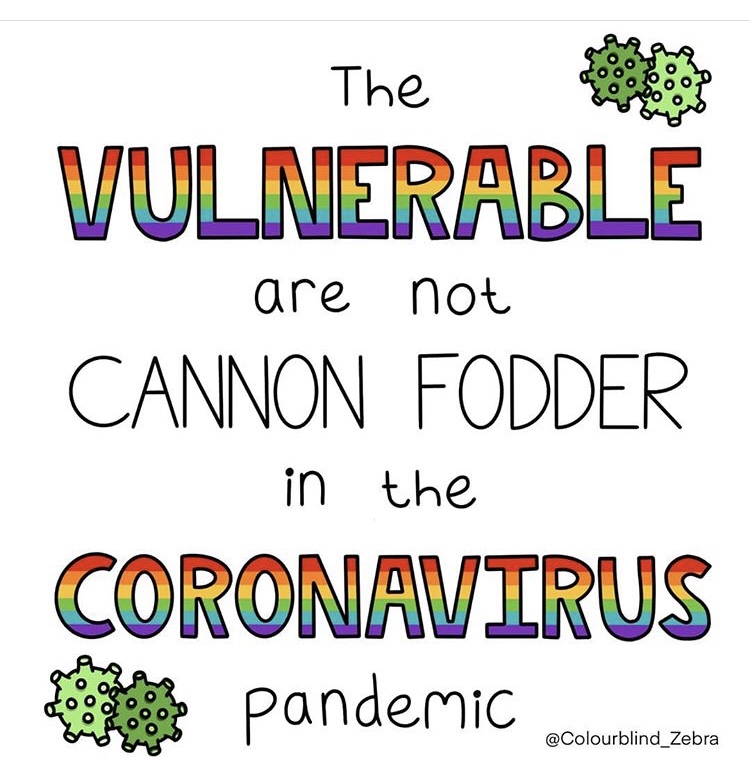 Like Loading…
← covid-19 – please don’t let your guard down now (no matter what the politicians tell you).
→ this little spoonie is doing a new thing.

Start a Blog at WordPress.com.