There are so many things I love about the being from – and living in – the South. . .

We’ve talked about some of the wonderful things about my home. . .

So we MUST talk about the lingering UGLINESS in some hearts – that reared it’s head yesterday at Talladega – about an hour from my home – at the NASCAR race.

I’m not a big racing fan – but yesterday was Father’s Day and I’ve grown up around it my ENTIRE life with my Daddy and I have some wonderful memories of going with him.

When I was a very little girl, we went to the Birmingham International Raceway (BIR) at the Fairgrounds every Friday night to watch the stock car races.

Then, when those ended, when I was a bit older, we drove two hours one way every Saturday night to Moulton, Alabama, to go to the dirt track races with my great uncle Frank. Much like when I would go sit on a hunting stool while Daddy went on dove shoots or sit in the back of the boat when he went fishing, I would often take a book. . . but I had a great time being his ride-along and talking his ear off while we would go wherever we were off to.

He always had the races on TV on Sundays and he even took me to one of the NASCAR Talladega races to have the experience many years ago.

So, yesterday, on Father’s Day, when I opened Twitter and saw a Tweet from Marty Smith that a noose had been found in the Bubba Wallace – the only full-time African American driver, who pushed for the banning of the Confederate Flag at events – garage?

I immediately began looking around online and within two minutes of my seeing the tweet my husband received a breaking news update with the same information. 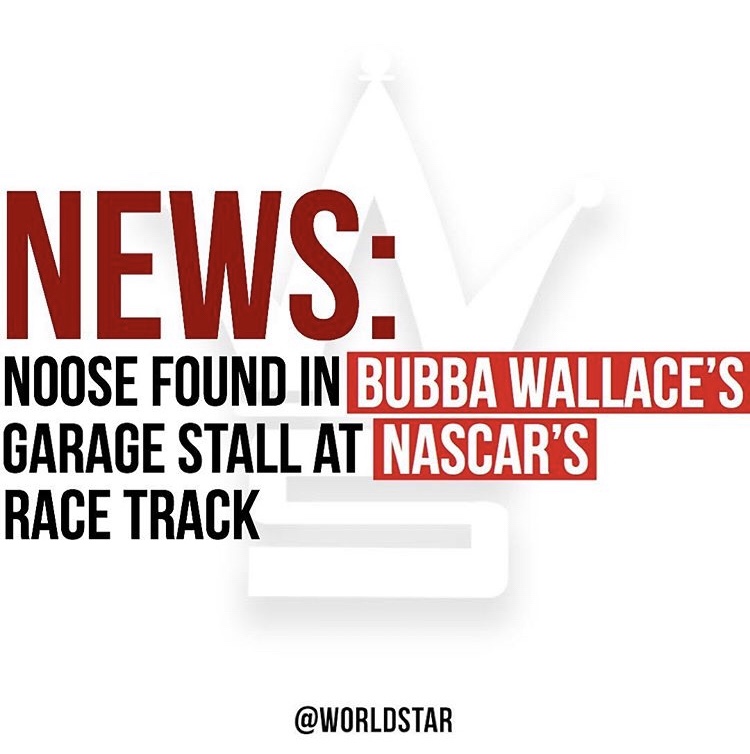 As I had not been following anything about the race, I did not see until then that some backwoods idiot had also done this yesterday:

As you can see, these people are just consumed with their racism as there is no such thing as “European culture” linked to their hateful flag. Disgusting.

And as for their “heritage”? Southern culture is the things listed above – not this racist filth they are spewing – so they can just bite me.

My heart breaks for Bubba Wallace, having to experience this.

How must he have felt?

How frightening and upsetting and infuriating and hurtful and just disgusting.

We CANNOT tolerate this.

Yes, I have heard the argument that we can’t force people to change their hearts. . . and that is true.

But we damn sure can make them change their public behavior.

Yesterday, the race had to be postponed until today due to weather.

I am so thankful to see that there has been a swift response to this hate crime.

NASCAR has called in the FBI.

Richard Petty, racing legend and owner of Bubba’s team, has not been to a race since the beginning of COVID-19 but said he was going to be there today to support Bubba – and he was.

Seeing all of the other drivers stand in support of Bubba was deeply touching as seeing him in tears before he got into his car just hurt so.

Still, I know those responsible will be caught, banned, and, hopefully, charged.

And I also know that the vast majority of us are much better than this.

We will love each other through this.

We will get rid of this hateful, evil spirit among us – wherever it appears.

We will rise above this.

We are calling on our better angels – and we will win. ❤